Last week, cryptocurrency researcher Kevin Rooke questioned the ability of Ethereum and EOS to support decentralized applications (dApps), given the dearth of users on those blockchains.

Now he’s wondering if most cryptocurrencies are getting enough use. He recently observed in a tweetthat only 27 cyrptocurrency tokens had 400 or more active users in a 24-hour period, commenting, “You’d think if ever a time to ‘buy the tip’ or ‘panic the sell,’ it would be today.” 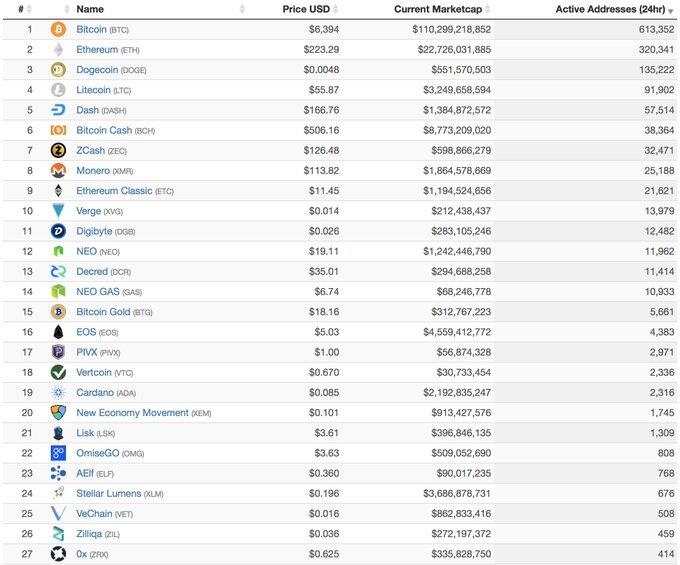 Only 27 cryptocurrencies had over 400 active addresses today. Yes. 400 users.

You’d think if there was ever a time to ‘buy the dip’ or ‘panic sell’ it would be today.

Rooke’s tweet generated a barrage of comments, some believing he raised a valid point, but many questioning the importance of his observation and some questioning the data he based it on.

Rooke compiled an index of cryptocurrencies with 400 or more active addresses in a 24-hour period on Sept. 5, as listed on the OnChainFX cryptocurrency research website.

His index focuses on a metric that reflects the extent to which cryptos are used for transactions, a feature that was one of bitcoin’s primary purposes.

And in comparing Rooke’s index to the currencies’ 24-hour volumes, there was a fair amount of correspondence. Bitcoin and Ethereum led both lists, for example, but there were some discrepancies.

The disparity isn’t based on an “apples to apples” comparison, as Rooke’s index shows the number of users making transactions as opposed to transaction volume. But at the same time, the fact that XRP did not appear on Rooke’s index when it accounted for more than $227 million in 24-hour volume raised questions. According to OnChainFX, XRP showed “no data” for 24-hour active addresses.

When one tweeter pointed out that OnChainFX shows no active XRP users, Rooke said XRP has other data missing as well, and postulated that some of the data cannot be gathered on the XRP ledger.

Also read: Ethereum and EOS only have 8 dApps combined with 300+ active users

Observers raised additional questions about the index on Twitter.

One pointed out that KMD had more than 1,000 active addresses for the day. KMD, which could not be found in the OnChainFX database, has a market cap of $127.847 million and more than $1 million in 24-hour volume.

Another claimed the list does not contain NX or TUBE and that both have more than 400 active wallets, demonstrating the incompleteness of Rooke’s index. (Neither were found on CoinMarketCap)

Another questioned the relevance of Rooke’s index since OnChainFX only indexes 107 out of thousands of cryptocurrencies, many of which have active user bases, to which Rooke responded that the ones on the index include the big cryptos, and claimed many coins don’t even approach the 400 number.

One observer suggested that a time frame longer than 24 hours might better reflect user activity.

Another compared the plethora of cryptocurrencies to all the pre-Google internet search engines.