As of Thursday, Sept. 25, the bitcoin price has climbed about 3 percent, briefly crossing the $6,700 level and extending toward $6,750 at one point in the early evening.

While this movement has made plenty of cryptocurrency  traders and investors happy in the short-term, a recent analysis of spending patterns relating to some of the earliest blocks of bitcoin has revealed that a very early miner has been taking advantage of the last several years’ long-term upward trajectory to slowly cash out tens of thousands of coins since Dec. 2016.

A recent tweet from a cryptocurrency expert, Blockchain data analyst Antoine Le Calvez, has revealed that a mysterious bitcoin miner has managed to send approximately 30,000 BTC cryptocurrency exchanges between Dec. 2016, and Jan. 2018, potentially cashing them out for a mammoth payday.

According to Le Calvez, the mysterious bitcoin miner has been smart enough to cash in on their youngest blocks of bitcoin to not reveal the full extent of their mining period. 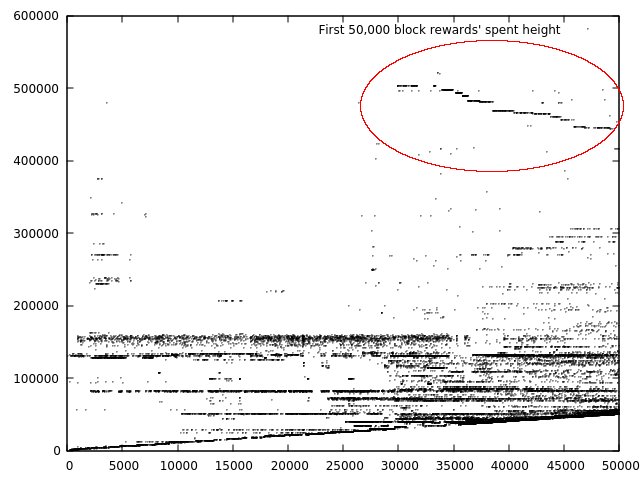 An analysis of the spending patterns of the earliest blocks of Bitcoin seem to indicate that a very early miner sent around 30k BTC to exchanges from Dec 2016 to early Jan 2018.

It would seem that, at the latest, the mining started somewhere around Dec. 2009, back when the value of BTC wasn’t much above $0, still wasn’t anywhere near reaching dollar parity, and the flagship cryptocurrency could be profitably mined with a standard-issue CPU. The first Bitcoin Pizza Day, you will remember, did not occur until 2010.

Furthermore, the researcher believes that the mystery miner had mined for at least seven months. Through this time, he managed to acquire more than 30,000 BTC since block rewards were high and miners were few.

For those confused by the chart:
X-axis is block height, time flows to the left.

Y-axis is when that block was spent, if it was, also expressed in height, the higher the dot, the most recent the spending.

He speculates that the miner could have even commenced mining operations earlier than Dec. 2009 since, recognizing that spending older coins is more likely to attract attention, he desires to conceal his sell-off. For some, this may raise questions, such as whether the mystery wallet owner is not Satoshi Nakamoto himself, although the researcher seems to think otherwise.